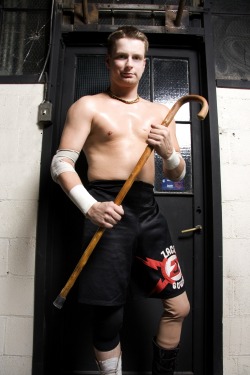 When undersized, one-legged wrestler Zach Gowen was matched up in his hometown of Detroit against future UFC heavyweight champion Brock Lesnar, there was only one way it could go: Gowen was in for one of the most convincing beatings in modern wrestling history.

Gowen's left leg was removed when he was eight, as a result of osteogenic sarcoma, a cancer that could have been fatal had it spread. By the summer of 2003 - little over a year after his pro debut - he was in the midst of a short-lived stint in WWE, during which he played a plucky underdog. 'One week I'm bagging groceries and the next week I'm on TV with Vince McMahon, Hulk Hogan and Roddy Piper,' he says. Lesnar, meanwhile, was wholly credible in his role of the huge, unforgiving bully. 'He was like something out of a videogame,' notes Gowen.

Before the bell rang to signify the start of the contest, Lesnar casually left the ring to taunt Gowen's mother, who was sitting in the front row. A hopping mad Gowen took the opportunity to vault over the top rope on to a distracted Lesnar, which - in an inspired move - he followed by clubbing him with the prosthetic leg that he had removed prior to the match. It was the last offence the 20-year-old would have all night. Lesnar was soon disqualified when he clouted the one-legged wonder in the head with a folding chair but the onslaught continued as he flung Gowen - who was, by now, bleeding extravagantly - leg-first into the ring post. Twice. As a finishing touch, Lesnar tipped Gowen off the stretcher that he was being wheeled away on.

It was, says Gowen, 'one of the easiest, funnest matches I've ever had because I didn't have to do anything. All I had to do was get beat up, which is what I'm good at. For Brock to destroy the hometown kid in front of his family was really good TV. Brock was a real nice guy - he really took care of me. That's where the magic of pro wrestling is: to make it look like he's killing me but he's not really hurting me at all.'

In fact, the only real damage was to Lesnar - and that was before the match even started. Prior to the show, Lesnar, Gowen and WWE boss Vince McMahon were in the ring, discussing what would happen during the bout. 'The original plan was that I would try to dive on to Brock but he would catch me and ram me into the post,' explains Gowen. 'Vince goes, "Well, that's a great idea. Why don't you guys try it?" And so I dove over the top rope but I came in a little too high and, on the way down, my right hip clipped him in the jaw.  And it knocked him clean out. I think Brock was a little embarrassed but it was totally my fault. I don't know if I'm the only person to ever knock him out, either accidentally or on purpose, but I can say that I knocked out Brock Lesnar, UFC heavyweight champion.'

This is an extract from Wrestling's 101 Strangest Matches by Oliver Hurley. Buy it now from amazon.co.uk